An Overview of Receipt Printers

Receipt printers are vital point of sale hardware that are used for printing sales transaction records. There are a few different types of receipt printers available on the market. Impact, or serial dot-matrix printers, are initially cheaper to purchase — but you must also purchase pins and ink ribbons, which add up over time. While thermal printers are a little more expensive, they're faster and quieter.

What's the difference between thermal and impact printers?

Thermal printers produce a printed image by selectively heating thermal paper (receipt paper) when the paper passes over the thermal print head, turning black in the areas where it's heated. Two-color direct thermal printers are capable of printing both black and an additional color (often red), by applying heat at two different temperatures. Since the paper is heat-sensitive, there is no need to purchase ribbons. Thermal printers have a more defined print, are quieter, and are usually about seven times faster than other printers used in point of sale systems.

Which type of printer do you recommend?

What are the name brand printers? 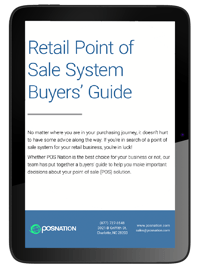 Whether you decide to do business with POS Nation or select another provider, knowing what questions to ask can help you get past the sales pitch, and to a solution that works for your business.

Looking for the right POS?

Searching for the perfect POS solution for your unique business is one of the most important considerations you need to make as a business owner or manager.

We've created a simple guide to help you make the most informed purchase for your business, employees, and customers.